Surprise! And Count Your Blessings!

Do you like surprises? If you do we can cure you of that. We've been travelling for a week with our camper on what is supposed to be an extended trip to Canada and back. And it has been a series of unpleasant surprises. The first was opening the camper and finding the refrigerator door open and a bottle of beer that popped open when it feel out onto the floor. I suppose we can consider our camper baptized in beer. And it didn't make the surprise more agreeable that it was my fault since I didn't check the latch on the door.

Our second surprise at our next stop was a tipped over quart jar of honey that dripped down into the cupboard and onto the floor. I was as agitated by the loss of our precious honey as I was by the mess. We will be cleaning up honey forever I think. I keep finding more places covered with the sticky stuff. So far no ants thank God, but I expect to find that surprise sooner or later.

Our latest surprise was a more significant one. At Hopewell Rocks on the Bay of Fundy Larry hurt his knee climbing the stairs. We hiked four miles on a moderately difficult trail the day before and the stairs were the last straw I guess. As I type at the Visitors' Center he is icing his knee and limps around using hiking poles for support. He can't drive and is in significant pain. We cancelled our week at the Cape Breton Highlands on Nova Scotia and now contemplate returning home. I am not thrilled at the "surprise" prospect of doing all the driving home to Virginia pulling the camper. Let's see...that's about twenty hours of driving with short stops. 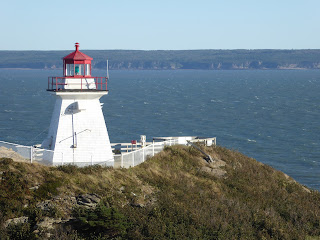 But all the surprises haven't been bad. A kind gentleman who saw us pulled over looking at our map shortly after crossing into Canada stopped to ask us if we needed help. The clerk in the pharmacy where I went after Larry's injury to get an ace bandage suggested a cold pack and went and got it for me. The ranger at the visitors' center helped me cancel our reservation at Cape Breton and was solicitous about our situation.

And, of course, it is no surprise that nothing can diminish our knowledge that God is good and has us under his protection. Had Larry's knee given out on the Coppermine Trail in the woods, it would have been much more serious actually requiring a rescue. No way could he have maneuvered some of the steep gullies we had to get across. And we still have our eyes and the beautiful views along the way. We drove the scenic route back from Hopewell Rocks with a stop at Cape Enrage which has breathtaking views and a lighthouse -- also ziplines, but something tells me that's one surprise not in our future.
Posted by Mary Ann Kreitzer at 7:48 AM

They say the worst things you experience as a family are the most memorable things you all laugh about in later years.

I never believed that before, but can now, after many years of hard knocks, attest that while most of the details of our family vacations have faded away; what remains were the mortifying embarrassments, unplanned stops and random friendly personal encounters. Silly stuff.

One experience in particular (I will spare my wife the embarassement of details) continues to live as our family remembers, given certain reminders, recollect and tease their mother over a thing, an honest mistake, only she could have ever done. It was so like her. And part of why we love her. And we laugh about it together. Sometimes she does too.

It's really true about the memory of things. Never helps at the time. But still.

So true, which reminds me of one on our wedding day. My Dad was driving on the Balto-Wash Pkwy going to the reception. As we took the exit to Fort Meade we met a car going the wrong way down the exit. Fortunately no accident. But what a surprise!

Mary Ann, You should take it easy on the way home. Is there any need to hurry? Take your time and drive safely! Let us all know when you arrive home! Love to you and Larry, Emma

Larry is doing better and we are going to continue to Nova Scotia and Prince Edward Island although we will not be driving the camper up to Cape Breton and won't be doing any serious hiking. Thanks for your concern.

Hi Mary Ann,
Is there any way I just passed you on the highway this afternoon on your way to Cape Breton? I think I may have been behind you getting on the highway in Antigonish. Do you have a white truck and are you pulling a camper? I thought I recognized Larry driving and saw a "Choose Life" licence plate from Virginia. We live in Antigonish, right in town and would love to see you on your way back through. Please let me know if I am seeing things or if that really was you and Larry! God Bless, Clare Lazzuri (your 1997 summer border).

Wow! I'm hearing Twilight Zone music or maybe the angel choirs. We are indeed on Cape Breton camping at Whycocomagh right near The Farmer's Daughter for a few days and then we are going to Prince Edward Island. We'd love to see you. Right now our plans are loose. We've scheduled three nights at the campground with the possibility of staying another few days depending on the weather, etc. What a delight it would be to see you. My cell phone is 540-975-0755.