A Day in the Life of a Grandma with a Rube Goldberg Brain!

Today was interesting. It gave me a little insight into how my brain works. I suppose I could describe myself as a bee flitting from flower to flower collecting a little nectar here and a little there, never staying at one thing for long. But maybe a more apt description is that my brain is like a Rube Goldberg contraption. There's a goal at the end, but the journey from beginning to completion takes some strange turnings.

That's what happened to me today. My goal was cleaning the upstairs. I started out with my long lambswool duster to go around the ceilings getting cobwebs. That's usually pretty straightforward. I start at one spot and follow the ceiling around the entire floor. It might take me five minutes all together.

I started inside the door of the master bedroom and followed the wall until I got to the dressing area and the bathroom, then out of the bathroom, along the wall and into the closet.....oops!

That was my first stop. I noticed that the dust on the priscilla curtain in the closet was...well...let's just say we've lived in our house for 18 years and I've never taken it down. The dust was pretty thick!

But really! Who puts a window in a closet and then puts a fussy curtain up to cover it? I'm not fond of priscilla curtains anyway and they were on almost every window in the house. Most are long gone, but this was a mostly unnoticed holdout. 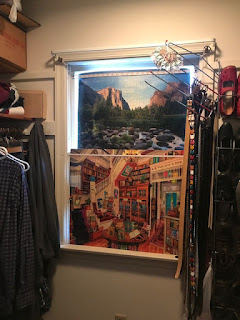 The shade has never been raised since we moved in (sun fades things terribly). Anyway, I decided to take down the curtain, shake it, and throw it in the wash.  While I was doing that I thought, "Why put it back up?" And the shade was in really bad condition so I took that down too, cut off the good portion to use as a table protector for crafts, and threw the rest out.

But now I had an uncovered, sunny window. That would never do!

My first thought was putting dark construction paper on the panes. But then I had a brilliant thought (well...a fun one anyway). I have lots of jigsaw puzzles that I've glued together. Wouldn't it be fun to use two of those to cover the upper and lower portions of the window.

So I moved on to choosing a few puzzles from my stash and leaned them on the window ledges to check them out. But the sun shone through the edges of every piece sort of obscuring the pictures.

Hmmmm....what next? Into the office where I had poster board. So I mod podged poster board on the back of two puzzles and tacked them up in the window. Now whenever I go in the closet I will enjoy the memories associated with the puzzles. One was a Christmas gift from a friend in 2017. The other was a birthday present from one of my children in 2013 that the grandkids and I all worked on over Easter break.  Our son and his wife went off on a little outing while we had cousins' camp with the puzzle as part of the fun.

How do I remember those specifics? When I finish a puzzle and glue it together, I write the memory on the back.

So finally, several hours and several detours later I went back to dusting and vacuuming the bedroom. But at that point I was too tired to finish the rest of the upstairs and had to clean up from my projects.

Tomorrow is another day...and no doubt another adventure as I clean the rest of the upstairs. God has a great sense of humor. He must since He gave me a Rube Goldberg brain.